“Within five seconds of meeting someone, either in business, at school, or socially, you make a critical first impression.  That impression is made up of the following:

Our modeling school has recognized the importance of a first, and last impression, for 60 years…teaching self-development (finishing) and fashion modeling.

Counter-intuitive: Go Bulky to be Girly 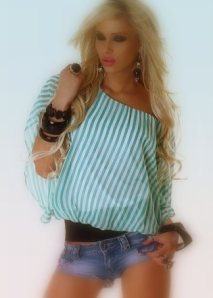 Never too many or too bulky when it comes to bracelets and rings!

Often the questions are all about “passing.”  These questioners generally look like drag queens.  What gives them away, paradoxically, are their attempts to be ultra-femme.

But the sad fact is that dainty jewelry and long hair, for example, just accentuate the masculine.  The contrast is too sharp — drawing attention to rugged hands, thick neck, or whatever the very traits you’re trying so hard (too hard!) to disguise.

Only now, after countless facial feminization procedures, do I even dare to wear my hair long.  But there’s nothing I can do, alas, about my unfortunate hands, so lots of clunky bracelets and rings remain my preferred adornment. 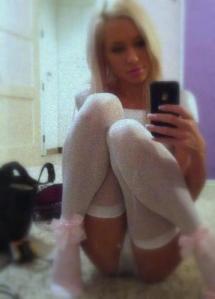 Someone needs a new smartphone!

To see yourself as others see you?  Or to create the self you want others to see?  Either way, you’re an object — most likely, a sex object!  So how to explain the proliferation of so-called “self-shots” on the Internet?

Two methods are most common: (1) photographing a reflection in the mirror; (2) photographing one’s self with the camera in an outstretched hand.  A third (pre-smartphone) method involves using a traditional camera’s timer or remote-controlled shutter release.

Before photographs there were paintings, of course.  That’s when mirrors — or reflections in things like silver teapots, in 15th Century Europe — to capture one’s own image were first employed.  Interestingly, almost all significant women painters, much more often than their male counterparts, have left examples of self-portraiture.

These self-portraits of artists open a fascinating window, critics have found, into the self-perception of people with psychological issues typically associated with artistic temperaments.

But what of today’s nude or provocatively clad self-portraitists?  What are our psychological issues?

These advertisements for one’s self often convey a strong sense of narrative — as mundane as the style and color of the undies we choose to wear on a particular day to vignettes of fantasy, role-playing, and fiction.

The fact that I am brazenly offering myself up — rather than being secretly seen by a third-party observer/photographer — might make me an even more desirable sex object?

For I’m asking for it, right? 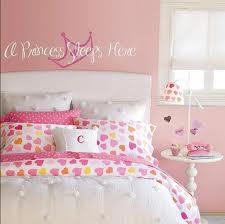 My bedroom window looked out — at a safe distance and from the omniscient perspective of the second floor — onto the street. It was not a busy street, but the cars and foot traffic that did pass were enough to enliven the otherwise still life framed by my bedroom casement.

That it was a casement, rather than double-hung, I realize in retrospect, took on great importance. Even more important was that I, at even so young an age, knew — and had wanted to learn — the difference between casement and double-hung. The window treatments for each are so different. Had I been born a boy, a real boy, I’m sure I would have never noticed.

Yes, I was meant to be a girl. And more: a girly girl.  Little wonder that the greatest of women’s literature, from Jane Austen to Virginia Woolf, has always been grounded in the notion of interior space and confinement.

The floor-length mirror screwed to the interior side of my closet door was my closest friend. It had no frame at all, and of course revealed nothing when the door was closed into the darkness of the closet. But when the door was open and I was bold, what worlds it opened up!

With towels and sheets and random fabrics, I improvised and fashioned my own designer wardrobe. I well remember one of my very first creations: a scandalously tiny bikini bottom made from two red kerchiefs, each folded into a triangle and then joined with a square knot at the apex.

After my fingers tied the ends of each kerchief together where they overlapped on my hips, I stood up, admired my creation, and wiggled and gyrated before the floor-length mirror. Such fun!

But I wanted more (don’t we always?).  I – and my creation, my very own bikini – needed to be seen by others. First, I would have to fashion, also out of red kerchiefs, a matching top, though I had no titties yet to fill it. Then, with my costume complete, I spent days and nights practicing and prancing in front of the floor-length mirror.

What would happen if I really did venture outside and let people glimpse me? I had to know.  So one day, when no one else was home, my bikini-clad body snuck outside.  A large beach towel draped around my torso would convey the false impression that I was modest.

A large linden tree’s trunk next to the street, I hid behind.  When I heard a car approaching, I stepped away from the tree so that I could be seen by its occupants and dropped the towel as if I was about to lie down on it to go sunbathing. Then, as the car passed and I could see the people inside staring at me, I feinted surprise, wrapped my arms around my tiny bikini top and even tinier tits, let out a soft squeal, dropped my face as if embarrassed, and quickly baby-stepped away from the street.

Over and over, as I would hear another car approaching up the street, I would repeat the thrilling ritual. Revelation and concealment. Getting the attention of others. Shocking them as if I were an apparition. Exciting them: I could only imagine the intensity of it, but strangely I felt I could feel it, really feel it, the excitement, as if I were they.

But to actually be the bikini-clad and shockingly out-of-place nymph was the most exciting of all.  And so it was that I first tasted the tempting fruits of teasing and seduction. And there would be no turning back….  My closet door with its floor-length mirror, never to be closed again.

For a “normal” girl, which comes first: menstruation or getting your ears pierced? What if, as in my unfortunate case, the former never happens? Does that mean I’ll never be a woman? In which said case, piercing will have to do.

So getting your ears pierced becomes perhaps the most important rite of passage for special girls like me.

It’s fitting, of course, because being pierced is not unlike getting fucked for the first time. Poking a hole in my earlobe = breaking my imaginary hymen!

But the beauty of piercing is that I got to lose my “virginity” a number of times! The very first time, well before my “Sweet Sixteen,” I cajoled a jewelry store clerk to use one of those piercing guns on me.

By nightfall, when I had to be back home, I had removed the temporary plugs designed to keep my new holes from healing. And I covered the tiny red spots on my earlobes with makeup foundation and concealer. 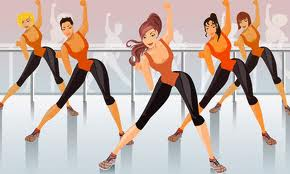 Even better than sex, I sometimes think, is simply being accepted as one of the girls. I’ll never forget my very first aerobics class! Wherever I am, I try to recreate that experience. I’m a member of the club…been admitted into the secret sorority. What more could any would-be girl want or ever need! (Besides an occasional, wonderfully reaffirming hard cock, mais oui.)