A “real blog,” according to a recent article in The New York Times, is one that “reflects one voice, is essentially unedited, and causes the writer to experience butterflies of anxiety as she hits the publish button.”

Sounds like how I feel whenever I drop to my knees and unzip a stranger.

Also sounds like how I feel every time I venture out of the house in the shortest and snuggest of short shorts!

All three have the same goal, now that my bimbo brain is forced to think about it:

To make you — dearest reader/stranger — hard!  So, so hard, and thus so, so indescribably yummy.

“Within five seconds of meeting someone, either in business, at school, or socially, you make a critical first impression.  That impression is made up of the following:

Our modeling school has recognized the importance of a first, and last impression, for 60 years…teaching self-development (finishing) and fashion modeling.

Instead of short shorts….

….What if my latest fashion purchase was referred to as “sea-level-rise-induced-by-global-warming hotpants,” would I then begin to be taken more seriously?  Not that I pretend to be a real intellectual or anything, but still….

Why don’t people take us shemales seriously?  Is it because we’re perceived as boys who just want to be bimbos?  The truest and most authentic of bimbos who’re only interested in and motivated by sexy, dolled-up clothes — and, of course, sex itself?

But “regular” transsexuals — those who follow through on SRS (sex reassignment surgery) — are often treated with the utmost dignity and respect.  (That is, obviously, except among Philistines and homophobes!)

Not only are transsexuals like Jan Morris (the travel writer and essayist) and Jennifer Finney Boylan (the English professor and author) greeted with respect, even awe — but also are considered intellectually serious thinkers worth paying attention to.

My mission, then, is clear.  It’s simple.  You can guess what it is! 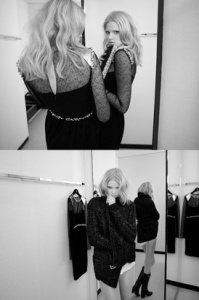 For answers to life’s most enduring mysteries, go shopping.  I have my best, most profound thoughts while trying on clothes in a store’s fitting room — all alone, just me and the mirrors, and clothes,of course,  lots and lots of clothes, different styles, different looks, different sizes!

As many choices, seemingly, as there are stars in the universe….

From the suits the sales associate has left with me, I slip on the cobalt blue, raw-silk skirt.  It fits perfectly.  But the matching jacket is another matter — much too tight around the shoulders!

This happens to me a lot.  For there are no hormone therapies or surgical procedures that can diminish my studly broad shoulders.  When the store offers the jacket and skirt as a pair that cannot be sold separately, the ethical dilemma becomes:

Do I tell the sales associate that I need to mix and match?  Or do I just do it?  (And secretly hope that the next customer will have the opposite problem to mine, namely narrow shoulders and broad hips!)

The disembodied voices coming from the adjacent stalls are of no help.  The chatter belongs to women who have their own consequential choices to make.

It’s dangerous to have too much time to try on clothes.  The temptation is to luxuriate in the possibilities, to experiment with endless looks as if a teenager.  Then the paralysis of perfectionism sets in. Before you know it, the morning’s gone.

But the world has kept on spinning:

There’s news chatter about the U.S. “alienating its European allies,” and I think of ugly clothes that don’t turn heads.

And “the end of history” must mean androgyny and unisex (sooooo boring) fashion.

You Sexy THING You

Leder Leggings! How cool (how hot!) are they!! From a fashionably chic shop in Switzerland.

Am I a person or a fetish?  A human or a thing?

Without leather leggings (as pictured) — not to mention the matching thong and demi-bra — do I even exist?  Snug leather (once animal first-, now human second-skin) is not the only clothing fetish, of course.

So when I don a male admirer’s requested (and requisite) black mesh hose and garter belt and stiletto heels, I realize that what I have between my legs, so out of place on a real woman, is like a fetishized garment too.  As much as the hose and the heels and garter, he wants my male genitals to be there — even if I do not.

If only I could unscrew them and take them off and place them gingerly in my lingerie chest when, satiated, he leaves….

Every girl fantasizes about her wedding. Especially her wedding dress.  The groom — no matter whom she is actually marrying — is immaterial, at best a handsome prop.  So no wonder that one of the most popular style of wedding dress evokes the fantasy creature of the Mermaid!

And so no wonder, too, that every little boy who would rather be a girl always fantasizes about being a mermaid….

Most certainly, I did.  While dreaming of wedding dresses would have been discouraged, to make-believe I was a mermaid simply showed an active and admirable imagination.

I even made several mermaid costumes.  Long before I ever became fluent in the word “sexy,” that’s the way I felt with the tight fabric wrapped snug around my legs and butt.  That I was so constricted I couldn’t move except to wiggle made the sensations even…yes…sexier!

No longer earthbound, my mind was propelled by my newly created, undulating tail through an endless, sensuous sea.

Psychologists would opine, of course, that transsexuals naturally identify with mermaids because the absence of legs means there can be no genitals between them.

But the poetic interpretation I find preferable and more powerful: Like mermaids, we “shemales” are amazingly fantastic mythological creatures.

Back in the days before ubiquitous computer screens, when people used to go outside occasionally, you could always tell a man from a woman just by the way they walked.

Walk is the wrong word.   To be a desirable woman means to strut.  A man who wants to “pass” as a woman must therefore know the strut; not to know means he will be “read.”  Being naturally tall and slender helps.

To see it: a confident and elegant woman’s tantalizing strut — the actual word in alluring action — can make the most ancient and decrepit of men cry.  The tears are tragic; for the lustfully alive legs and hips creating the strut may be seen but never again, as in their virile youth, possessed.

So it is that to feel it — to actually do the strut yourself – is indescribable.  Maybe that’s what makes it so impossibly hard to master.  If no words exist, how can an ignorant would-be woman ever be taught?

That was the primary reason I enrolled in modeling school – to learn to strut.  Once upon a time “educational” places like this used to be called a “charm school,” and I wanted to learn all the other secret feminine charms, of course.  But how to walk – to strut – was my main motivation.

Everyone was surprisingly welcoming.  No one said I didn’t belong.  Maybe they were afraid some macho boyfriend of mine would sue on my behalf for sex discrimination?  Whatever…. The tuition for the six-week course was the best investment I ever made.  Cosmetic surgery is costly, but learning to strut is priceless.

Even now, after so many years living “full-time,” I don’t always have the steps down.  The strut may be a learned movement, but once learned, it must be as natural as breathing.  If I become too self-conscious, I can look like I’m on a fashion catwalk: my arched back becomes exaggerated, my gait too slow and long, my wiggle just a bit too wiggly.

But when your hips are undulating just right, your stride feeling like a glide, and the very clicks of your heels making heads on the street swivel, you know you’re in the groove…you’ve got the strut down pat.  With eyes fixed straight ahead, mobile device hand-held to your ear (especially if you’re not really talking with anyone!), the experiences you absorb as practitioner of the strut are like no other.  Truly, you see the world differently.

But mostly the world sees you…envies you…desires you.  You’ve got the strut.

Consider, for a moment, skinny jeans and boots. They’re the fashion fad du jour. So ubiquitous, almost like a uniform.

Now consider moi. It’s important for girls like me to blend in. But like any natural girl, I want (need?) to stand out, too. We all might be wearing the same outfit, but it’s the nuance that’s most important: how the jeans are filled!

Waiting for a cab, rushing around the airport, all of us jean-and-booted mademoiselles are checking out each other’s derrieres.

To make other girls envious – is that our raison e’tre?