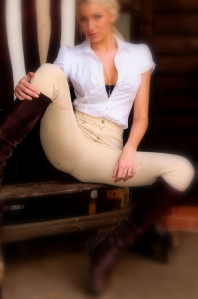 A fantasy girl, that’s me, according to a lot of guys.  I’m “that girl with something extra!”  — the description alone can make those same guys drool.

But what about me?  Can’t I have fantasies, too!  Sex objects are people, too, aren’t we?  So here goes:

I want to be fucked by a stallion.  That’s not to say that I haven’t already been fucked by lots of guys who consider themselves human stallions.  (Some were, some weren’t…but that’s a discussion for another time.)

I’m talking about a real stallion.  Yes, a horse!   A horse, of course!

Isn’t that what they say Catherine the Great did?  And some people would call me a queen (of the queer kind), right?

But to be honest and practical, I’m sure I’m simply not big enough to actually take the cock of a horse.  I would probably be split in half and painfully killed.

Still, it’s fun to imagine — to fantasize about….

One response to “Fantasy Girl!”